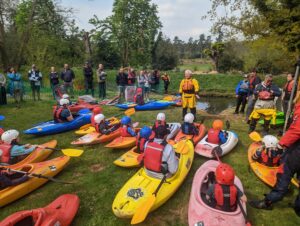 On Saturday 23rd April Blackwater Valley Canoe Club once again decamped from the Lido, over to Garner’s Field Campsite to support the Farnham Scouts family camp.

Each year the Farnham District Scouts hold their Family Camp where all the Scouts, and their families, from the Farnham District can enjoy a weekend of fun activities. In what has become a long standing tradition a team of volunteers from BVCC support the camp by running a day of kayaking taster sessions, free for anyone at the camp to attend.

After being cancelled for two years due to the pandemic, Family Camp along with BVCC’s kayaking activity, was back and bigger than ever. BVCC’s work began on the Thursday (the first day of the camp) with a group of volunteers transporting 26 kayaks & paddles; along with paddling kit and various other equipment, to the campsite. Then early on Saturday morning a team of 12 BVCC volunteers descended on the campsite to setup for the day’s activities. After laying out our boats and equipment on the bank it was time for some of us to don the drysuits and go for a refreshing dip in the River Wey, in order to set up the demarcation lines and prepare for the first session.

While our volunteers in the water were getting setup an equally dedicated team was busy on the bank getting scouts signed up for sessions and fitted with buoyancy aids / helmets. The club’s volunteers were grateful to receive continual support from a steady stream of Explorer / Network Scouts and parent helpers (some of who were also club members) throughout the day.

The first session was soon underway; after getting their BAs and helmets checked the scouts were shown to their boats where they received a quick safety brief and introduction. With that out the way the session began for each participant with a slide down the bank and into the river. From there our volunteers in the river had the task of providing coaching & advice to those with little to no prior experience of kayaking, as well as ensuring everyone was kept safe on the water.

There was little respite for our volunteers on the bank between sessions, once one group was on the water the focus soon moved to getting the next group ready, then on to hauling the boats back out the river at the end of the session.

This process repeated throughout the day with our volunteers running a total of 12 half hour long sessions. The kayaking activity was so popular that all the day’s spaces were fully booked within about an hour of the first session starting. After discussion with the volunteering team it was decided to increase the number of participants per session slightly and these spaces too were rapidly booked up. In all about 270 scouts and family members took part in BVCCs kayaking taster sessions. For the volunteers it was hard work, but also a very fun and rewarding day.

BVCC would like to thank all the club volunteers who helped run the day, along with all those from the Scouting community who came to support our volunteers throughout the day, both in the water and on the bank. 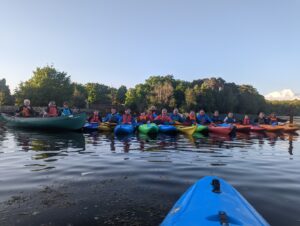 Our spring canal sessions ended with a very enjoyable (and surprisingly sunny) paddle on Wednesday evening. Turnout was good and everyone enjoyed themselves. We’ll now be having a 2 week break from Wednesday sessions and then it’s back to the Lido on the 1st June!

We have plenty going on in the meantime though:

As always you can see what’s going on, and sign up, on our events page.

Finally we would like to say a massive “thank you” to Basingstoke Canal Canoe Club (with whom our club is affiliated), who have allowed us to use their equipment for our canal sessions. This has made running these sessions a lot easier for our members and volunteers alike. We look forwards to further collaboration with B3C in the future. 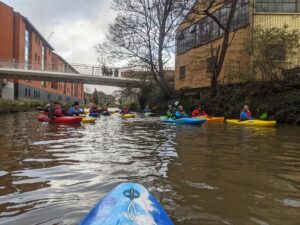 Happy New Year’s everyone! The club was back paddling on Sunday 2nd January with our annual New Year’s paddle. This year we went for a nice social paddle along the river Wey into Guildford. After meeting at the Guildford Waterside Centre, nineteen club members paddled just under two miles up the River Wey to Millmead Lock in the centre of Guildford. After a break (and some chips from the pub) it was back on the river for a gentle paddle back. The paddle was enjoyed by all and offered a great chance to get people back together after the festive period; we even managed to save a pigeon which had got itself tangled in a fishing line. 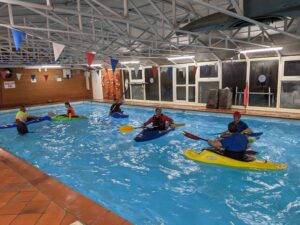 There will be no indoor pool session on Wednesday 3rd November 2021 as we are having a week off. We shall release bookings for the next 5 weeks of sessions on the 3rd November 2021. Bookings will be released for all sessions at once so you can secure and pay for a block of your favourite slots in advanced.

The sessions will be run in a similar fashion as the previous four weeks, with a mixture of structured and unstructured sessions to pick from. 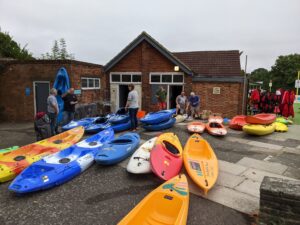 On Saturday 25th September a group of the club’s volunteers spent over five hours at the boat store carrying out maintenance. In that time they were able to get though inspecting the majority of the club’s boats and noting any required maintenance work to be carried out over the winter period. Many boats were also repaired, ensuring they are fully serviceable for the winter season. In addition the boat store racks were cleaned out and the boats put back in neatly making the boat store much tidier.

Our dedicated volunteers will likely be down the boat store more times over the winter period helping to keep our equipment in a serviceable condition. In addition to what you see our volunteers doing at sessions they spend many more hours of their time “behind the scenes” to keep the club running smoothly. 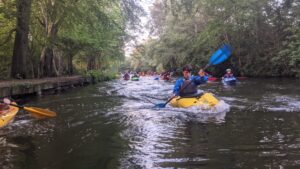 With lockdown #3 finally ending the club was able to get back to the Lido and we were treated to a amazing summer season. Everyone was glad to be back together and the average attendance for our summer sessions was in the high 30s, often hitting our 45 person capacity limit. Once the summer Lido season came to an end this momentum continued into our autumn canal sessions.

We ended up with around 30 people attending both of our canal sessions, over double what we would typically expect. The sessions were a great success with everyone thoroughly enjoying the chance to go for a nice evening of social paddling together down the canal.

Here are some pictures from our nights on the canal: 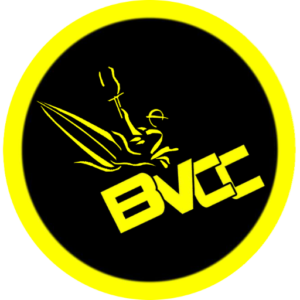 As you have probably noticed if you are reading this we have given the club website a bit of an update. We now have a club news feed where we can post updates, news, and other interesting information about the club, like what you’re reading now. The home page now also has a list of our upcoming events so you can easily see the sessions, trips, and other things we have planned in the near future.

There is also a brand new About Us page which contains information about our club, where we paddle, and the wide variety of disciplines we partake in. There are also plenty of photos from our club adventures to look through.

Have a look around and let us know what you think.